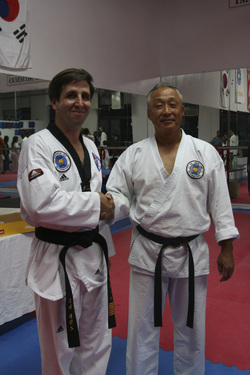 Taekwon-do is a Korean art of self-defense.  Contrary to the teachings of many of my fellow master instructors, practitioners and predecessors, Taekwondo did not originate thousands of years ago in ancient Korea.  Rather, Taekwon-do is a collection of similar unarmed martial arts techniques and foundations created by a number of Korean Grandmasters, including General Choi Hong Hi, when they returned to Korea from Japan following World War II.  While in Japan, these Grandmasters learned Karate-Do (meaning way of China Hand or way of Empty Hand) and the techniques they learned formed the basis for a new martial art.  On April 11, 1955, General Choi, then a general in the South Korean army, began to unify and systematize these related martial arts disciplines by giving Taekwon-do its name and its beginnings.  In 1961, General Choi became the first President of the Korea Tae Kwon Do Association, and until his death in 2002, he worked tirelessly and selflessly in the promotion of Taekwon-do and in the scientific advancement of Taekwon-do techniques.

Below you can find a more detailed list of the highlights of the development of martial arts on the Korean peninsula from ancient times until the present.  As you will see, Taekwon-do is not a martial art that was developed by one single person, nor can it be traced back to any one individual. Instead, Taekwon-do is a discipline that has scientifically developed into a system of various theories, terminology, techniques, methods, rules and spiritual foundations. As a result, the discipline, or the Way, can be constantly improved upon by its senior practitioners and instructors. This flexibility allows my fellow teachers and me to teach the fundamentals of Taekwon-do to new generations, and the next generation of teachers can in turn teach the Way of Taekwon-do to following generations, in each case adapting Taekwon-do to the changing times and students, while remaining true to the founding tenets. I consider Taekwon-do to be a living art of self-defense that will continue to evolve for years to come.

It is an unfortunate reality that martial arts are often attributed to a single person or claimed by a particular nation. This usually results from the selfishness of individuals or the nationalism of governments, with something to gain by claiming that they practice the original or pure form of a particular martial art. In particular, dictatorships are prone to these types of claims. However, teachers of Taekwon-do and other martial arts need to do their part to correct these misnomers by teaching their students the history of their particular style of martial arts. It is important that students be taught the truth about the fundamentals of the martial arts that they study, in order to get the most out of their training. It helps no one if instructors try to make martial arts the product of one nation or try to imbue martial arts with mythological backgrounds and lineages of thousands of years.

The following highlights the history of martial arts on the Korean Peninsula:

•                1147 to 1170: Soo Bak Ki is believed to have peaked in popularity. This was during the reign of King Uljong. Some historians believe that it was during this period that nei-chia or nae-gong (internal kung-fu) and wai-chia or wae-gong (external kung-fu) was introduced in Korea. This time period corresponds to China's Sung and Ming Dynasties.

•                1392 to 1907: Yi Dynasty.  Some historians of Karate believe that envoys from Okinawa learned Soo Bak Ki from mainland China and introduced it to Okinawa. A book on Soo Bak Ki was published during the Yi Dynasty to act as a training aid for the military.

•                1945: Korea is liberated from the Japanese.  Quite a few Koreans (e.g. Choi Hong Hi, Ro Byong Jik, Lee Won Kook and more), who practiced Karate in Japan, brought their martial arts training back to Korea after World War II.

•                In 1945, the first organization to teach martial arts in Korea, Cho Sun (Korean) Yeon Moo Kwan, which was to influence Taekwondo, was formed. Judo, Karate-Do, Gom-Do (swordsmanship), Kwon Bop (Chuan-Fa in Chinese and Kenpo in Japanese) were taught.

•                1964: On September 3, Taekwon-do was officially recognized by the Korean Athletic Union as a national event with seven weight categories.

•                1973: On May 28, the World Taekwondo Federation was founded. The First World Taekwondo championship at the Kukkiwon was held. By then, Taekwon-do was being practiced in 108 countries and 200 instructors were teaching in schools around the world.

However, Olympic fame is not Taekwon-do's primary purpose. Perhaps traditional original Taekwon-do may be better for the future.